skip to main | skip to sidebar

My Favorite Characters: The Jade Giantess 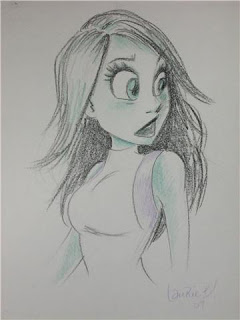 Jennifer Sue Ann Walters. Lady Lawyer. Sexpot Superhero. Avenger, Defender, Liberator, and more. Yes, arguably Marvel Comics' finest female character, but it's undeniable: all the good names were already taken. Wonder Woman? Taken. Green Lantern? Taken. Captain Marvel? Taken a BUNCH of times! Can't be Catwoman. Sprite? Ariel? Shadowcat? Nope, not hardly. She had to settle for SHE-HULK.
Oh, don't get me wrong. She's a girl Hulk. So, it is PRACTICAL. It's just a name devoid of grace, elegance, and dignity.
But, what's in a name? Most of us don't get to choose them. You go with what works. At least you do if you're my favorite comic book superhero OF ALL TIME!
Obviously, I'm not the only one. It just seems like it when she's always getting canceled. Wonder Woman? She's at 600 issues. She-Hulk? Barely broke 100 if you fudge the numbers.
But plenty of people like her. Try shulkie.com. That dude Lingster clearly has great affection for her. (And disdain for Peter David's run on her title, which I wholeheartedly share, sadly.) Plus, Family Guy's Chris Griffin apparently LOVES She-Hulk. It's the sort of thing I learn doing half-assed Google searches for She-Hulk information I didn't have. And I used to think myself QUITE the She-Hulk buff. In the early noughties there was a period when I owned her every comic issue and guest appearance. In the saner days since (girlfriend and wife days, it must be admitted) I culled the issues from my collection that could best be described as shit-tacular (both She-Hulk and others). But I can bypass the list I was GOING to make of 8 better uses of my time with my pants on to bring you:

THE EIGHT GREATEST SHE-HULK STORIES:
(Why eight? Because that's how many fingers I have left with both thumbs up!)

8. Bill Mumy and Miguel Ferrer's Comet Man # 4-
It's only a cameo, but it's a real eye-opener.
(By eye-opener I mean shower scene. Perhaps I'm becoming a tad predictable? No, really. It's not easy to find in used bookstore bins, which are vanishing into the ether themselves, but it's pretty cool. Those guys should write more.)

7. Jeph Loeb & Frank Cho's Lady Liberators guest story in Hulk #7-9-
One of my bookstore co-workers pulled the issue with the LL standing on the Red Hulk and tagged it with the post-it note: "Marvel's idea of female empowerment". Well, yeah. It's a seventies homage. Heck, one day girls'll even get the VOTE! Kidding aside, Frank Cho and Jeph Loeb seem to remember how to have fun. Shulkie working her way down the list of superheroines to phone for help and the LL being the bottom of the proverbial barrel never fails to tickle my funny bone.

Something I read today makes me think there's a scene in this that caused John Byrne's departure from Shulkie's title between issue 8 and 31. If true, at least me Bizarro Mike got him Superman out of it! Boo! But whatever the dilemma caused by shaved legs, it was a romantic thrill with fine characterization, some thought behind it, and very sadly one of the last great moments in the Jen/Wyatt Wingfoot relationship. But, by hook or by editorial mandate, a girl's gotta run free! And I prefer to think if there were bits I didn't like, they weren't Dwayne McDuffie's fault. I like that guy!

5. Ty Templeton's Howard the Duck: Media Duckling-
I like THIS guy too. See earlier posts. When I met him I also got the Laurie B. She-Hulk drawing photographed for this post! Sweet! HTD:MD owes something to Steve Gerber's weird run on Sensational She-Hulk, which I admit wasn't my favorite, but c'mon, for every Nosferata the She-Bat it had a BALONEYVERSE! I'll let you guess which one I thought was funny and which one I thought was labored. Cause I don't know anymore.

4. John Byrne's Fantastic Four-
The birth of the modern Shulkie. Confident, sharp-witted, cuddlesome, occasionally sarcasti-bitch but never disappointing. I side with Scott Tipton of Comics 101 in the belief that Jen's time on this FF team was the best this comic had been since Stan and Jack.

3. John Byrne's Sensational She-Hulk trade paperback-
Covered in Comics 101's 2007 posts, nevertheless, it is a treasured part of my collection and they'll have to pry it from my cold, dead hands. Does Byrne deserve three places on a list of 8? He deserves 4! Maybe someday he'll get to write more She-Hulk. A guy can dream, right?

2. John Byrne's Sensational She-Hulk 1-8, 31-50-
More or less. There's some filler. There's a lot of cheesecake. There is also some of the best funny book work of ALL TIME. In the best sense of the word funny. If the idea of a superheroine who has the power to KNOW she is a comic book character and manipulate her life accordingly doesn't appeal to you... you'll probably just read something else. But I think it's friggin' hilarious.

1. Dan Slott's She-Hulk All FIVE Trades-
Keep them close to your heart at all times to stop stray bullets! Jen's also got a brilliant cameo in Dan and Ty's Spider-Man/Human Torch #4.

By my tinfoil hat reckoning She-Hulk is 35 Marvel years old (for whatever that's worth in a universe where time slows down with every passing company-wide crossover) and they seem to be doing their level best to kill her and finally stamp out lighthearted, fun funnybooks in favor of a dour, grey morass of rain-soaked action scenes. Nice property you bought, there, Disney! Any chance of a She-Hulk movie?
No, I thought not.
See you kids tomorrow. Unless I'm trapped in the Baloneyverse.
(It's a universe made of old baloney.)
Posted by Mike The Bold at 6:06 PM

Mike The Bold
I write and draw now and then.